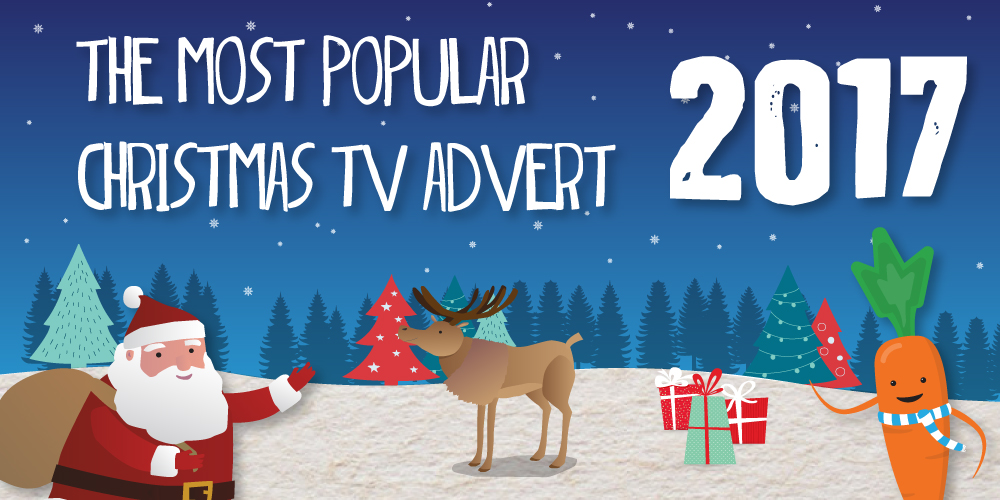 The Most Popular Christmas TV Advert of 2017

Despite going up against established Christmas TV advert giants, the most popular festive commercial of 2017 has been named as Aldi’s Kevin the Carrot campaign.  Forget Moz the Monster from John Lewis or Marks and Spencer’s high profile tie-in with Paddington, the German supermarket’s vegetable adventure is the most discussed on social media.

Data analysis firm 4C looked into the number of mentions of companies on Twitter, Facebook and other networks in the five minutes after each advert aired, and compared it with the volume of discussion about the brand beforehand.

Aldi was declared the winner in what they termed ‘social lift’, followed by Boots’ nostalgia-filled #ShowThemYouKnowThem clip.  John Lewis – traditionally the Real Madrid-and-Barcelona-combined of the Christmas advert market – limped home in a disappointing tenth position.

The ads were all ranked in terms of sentimentality too, with the words that social users deployed to describe them being analysed by 4C.  This data showed the public felt most positive towards Marks and Sparks, with Aldi running it a close second and Boots in third.

Here are the results: 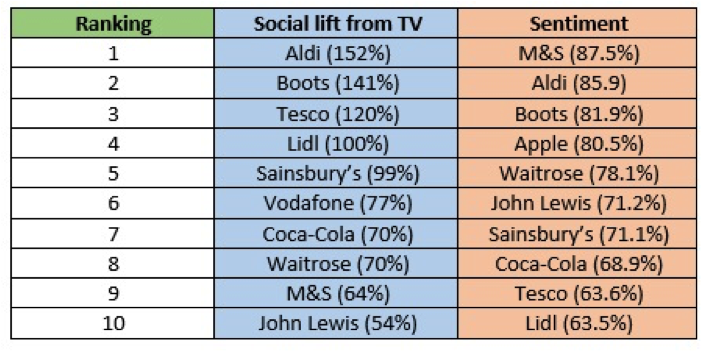 What Were the Christmas Adverts About This Year?

Discount Superstore Aldi produced its own version of Murder on the Orient Express, with Kevin the Carrot leaving his post as the nose of a snowman to board a train, wander through a sumptuous feast, find a dead gingerbread man, protect a female carrot from an explosion of peas and fall in love.

On paper (well, computer, phone or tablet screen), it may sound a little bizarre, but it’s not. It’s really bizarre. It doesn’t really give you much of an insight into the supermarket, other than telling you that they sell the stuff you need for your Christmas dinner. Well, duh.

Upmarket department store John Lewis set the bar for modern Christmas ads with a series of touching stories soundtracked by breathy acoustic versions of pop classics over the last decade.

This year it is Mancunian band Elbow, with an admirable take on the Beatles’ Golden Slumbers, providing the music, whilst a young boy befriends the monster under his bed, which initially frightened him into sleeplessness. On Christmas Day, he finds an unusual parcel under the tree, which turns out to be from Moz the monster. It’s a nightlight that helps him get some kip, but which consigns his chum to history. Once again, not exactly giving you the skinny on the experience of shopping at John Lewis.

The ad cost £7 million to make and is directed by Oscar-winner Michel Gondry, known for creating the Jim Carrey film Eternal Sunshine of the Spotless Mind.

John Lewis’ Christmas credit card bill of £7 million for a commercial is hefty, but M&S must have flung a few quid at their ad too. With Paddington 2 the big feature film in the run-up to the festivities, the Peruvian bear took time out to promote everyone’s mum’s favourite shop.

The marmalade sarnie-loving mammal thwarts a burglar who he takes to be Santa, unwittingly converting him to the straight and narrow in the process. All ends happily, as long as you ignore the furore about what exactly it is that the thief says to Paddington towards the end of the ad.

The Boots ad that came second for social lift and third in the sentimentality stakes tells the tale of two sisters in a series of moments over the course of their lives.

Scored by a vaguely John Lewis-y cover of Yazoo’s Only You, the commercial is heavy on the retro chic, featuring a particularly of-its-time brown Ford Capri, and shows the strength of the bonds of love through the decades.

As with virtually all the big Christmas adverts around this year, the link between the advert and the brand it is advertising is tenuous at best.

What’s your favourite Christmas TV advert from 2017?  What makes a great Yuletide commercial in your eyes?  Let us know.